The bat-eared fox lives in eastern and southern Africa, primarily in savannas, brush, and grasslands.

The foxes’ diet is made up of mostly insects, but they’ll occasionally add vegetables to their diet. Bat-eared foxes play an important role in termite control. A single bat-eared fox can eat approximately 1.15 million termites each year.

The better to hear you with, my dear!

The foxes’ large ears, which can measure over five inches long, help them hear insects, such as termites and dung beetles, moving underground. Bat-eared foxes can even hear larvae chewing their way out of buried dung beetle ball! They can also detect the sound of harvesting termites chewing on short grasses. While looking for food, bat-eared foxes walk slowly and quietly with their noses to the ground and their ears cocked forward, listening for insects. These oversized ears also help keep the fox cool in the hot African climate.

And now…the rest of the fox

Bat-eared foxes have yellow-brown to gray fur which is lighter on the belly and darker around the eyes, muzzle, backs of the ears, feet, and tail tip. In addition to their large and sensitive ears, bat-eared foxes have specialized teeth for chewing up insects, and their lower jawbone is designed to open and close rapidly. Their large, bushy tails work as a rudder when fleeing from predators in a zig-zag pattern.

Most bat-eared foxes are nocturnal. They spend their days in their dens, away from the hot sun. Their dens are usually found near large animals like zebras and wildebeests because that’s where a lot of insects, such as dung beetles, can be found. Bat-eared foxes may excavate their den themselves or use dens left behind by other animals. They are fast runners, but their best chance at escaping predation is fleeing to their underground dens, which have several entrances and multiple chambers connected by tunnels. A bat-eared fox family may have several dens throughout their home range.

Bat-eared foxes usually live in groups of two to five. Each group usually has one adult male and one or two adult females. Females give birth to two to six babies called kits. The mother nurses the kits for 15 weeks. Young are fully grown by about six months. Pairs or groups are often found residing near one another, and individuals come together at dusk to play and groom each other. Bat-eared foxes mate for life, and sometimes two females will mate with one male and share a communal den. The father is very invested in rearing young, and he spends a great deal of time babysitting. While the father is watching the cubs, the mother is free to forage for food, including insects, which are a steady food source. 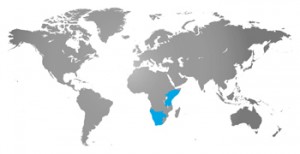