Living under the leaves

You can find the black-breasted leaf turtle in Southeast Asia, where they live near streams in forested areas.

In the wild, these turtles eat various invertebrates, such as insects, worms, and grubs. They also eat decaying fruit from the forest floor and they will go into streams to collect insect larvae. Fruit, vegetables, worms and crickets make up their diet at the zoo.

At only 5 inches long, this turtle is one of the smallest in the world. The black-breasted leaf turtle has a dark, unpatterned undershell with a yellow border. Three raised ridges run from head to tail on the top of the shell, which is flattened with rough edges at the front and back to resemble a leaf, which is why they’re called “leaf turtles.” The turtles’ feet are partially webbed and their large eyes stick out in an unusual way, giving an alert and curious expression. They don’t have teeth – instead, their mouths have a hard, sharpened edge that they bite with, similar to a bird’s beak. Females’ tails are shorter and thinner than males.

Black-breasted leaf turtles produce their eggs from June to August each year. Females lay clutches of one to two elongated eggs, which incubate for 40 to 65 days. The size of the clutch is determined in part by the size of the turtle.

Black-breasted leaf turtle are threatened due to habitat destruction and over-collection. They are also used in Traditional Chinese Medicine, and are often sold as pets. These turtles’ unique facial expression and small size make them particularly attractive within the pet trade. Furthermore, the turtles are facing habitat loss due to rapid forest destruction in southeast Asia. 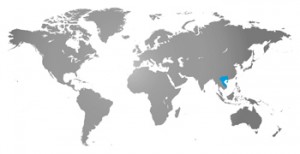