During the winter, black storks live in Africa, India, and southern China. During the summer months, the storks migrate to Europe, Russia, and northern areas of China. They inhabit forests near marshes, riverbanks and lakes so they can stay close to food.

In the wild, black storks will eat fish, frogs, aquatic reptiles and insects. At the zoo, the storks eat fish, mice, and meat biscuits containing essential vitamins and minerals.

A big bird, but not yellow

The black stork is a large bird, with black head, breast, neck and wings. But its belly and the underside of its tail are actually white, and its feet and beak are red. The stork’s feathers are glossy black with a sheen of green, bronze and purple. The long, sharply-pointed beak is used to nab small fish in the water.

Storks hunt for food by wading in shallow water and capturing prey with their spear-like beaks. The black stork walks slowly through marshy clearings or along stream edges, neck extended, head down, and ready to strike with its long straight bill.

These storks mate for life. Both male and female storks build their nest together and share parental duties. This bird creates an unusually large nest. The nest can measure 1.5 meters (nearly 5 ft.) in diameter and 1 meter (3.3 feet) thick. Breeding season begins in May. Two to five eggs are laid in a large stick nest over 2 days. Eggs are incubated by both parents and hatch in about 36 days. Young take flight around the age of 3 months and attain sexual maturity in 3 years. 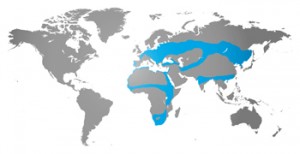