Home in the trees

Colobus monkeys live in the rain forests of central and eastern Africa.

These monkeys eat fruit, leaves, flowers, and twigs. At the Zoo, colobus monkeys enjoy a specially-made primate biscuit along with vegetables and bananas.

Munching mouthfuls of leaves is no easy chew. Colobus monkeys have well-developed molars that grind plant matter into a pulp. Then the monkeys’ three-chambered stomach takes over, fermenting the chewed leaves and breaking down the tough cellulose into useable energy. The stomach of a colobus is huge, holding a volume equal to that of a quarter of an adult’s body weight.

Colobus monkeys have specialized stomachs that help them digest plant cellulose. To get rid of the methane and carbon dioxide produced as a byproduct of digestion, they may belch in each other’s face as a friendly social gesture.

Colobus monkeys are black with white fur bordering their face and trailing down their back and rump. One of the most distinctive of all primates, the colobus’ dramatic coloration is a beautiful sight against the deep green background of central Africa’s rain forests. They have long, thick hair, with a cape-like trim of white for a dramatic appearance. Finishing the look is a two-foot-plus long tail, ending in a fluffy tip of white. Colobus monkeys also have unusually long fingers which help them swing through the trees, looking for food.

Each male leads a small troop of 4-5 females and young. He defends his territory with roars and tremendous leaps. Because they eat such large amounts at a time and take so long to process their stomach contents, colobus monkeys are not very active. When they are not eating, they are digesting. A troop of colobus monkeys spend lots of time sleeping or sunning in trees, their long white tails dangling below. With a laid-back lifestyle like this, they are among the least aggressive of all primates.

Think of trying to climb a tree—or doing anything for that matter—without your thumbs. Black and white colobus monkeys get around pretty well in trees, but they do it with practically no thumbs at all. The small bump-like digit that passes for a thumb provides little help in gripping branches. How do the colobus monkeys do it? When they need to jump from branch to branch, they use their four full-sized fingers to form a hook that helps them grasp a branch. Colobus monkeys are great leapers. Territorial males make tremendous leaps as part of a display to ward off other males. They can leap from tree to tree by launching themselves from a high limb on one tree to a lower limb on another. When predators threaten, colobus monkeys drop out of sight into the underbrush below, sometimes from a height of more than forty feet! 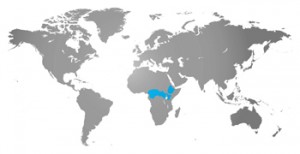