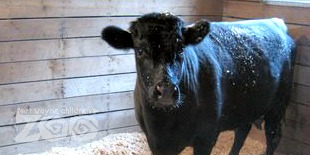 Where do cows really sleep at night?

Like most domestic animals, Bos taurus (domestic cow) is currently found throughout much of the world. The wild ancestors of cows were native to northern Africa, Europe, and southern Asia. Domestic cows have no upper incisors, instead they have a thick layer called the dental pad. The jaws are designed for the circular grinding motion used to crush coarse vegetation. Domestic cows are social animals and live in groups called herds. Each herd is led by a dominant male who is the sole male to mate with the rest of the females.

Irish Dexter cattle are a breed of miniature cattle originating in Ireland. The smallest of the European cattle breeds, they are about half the size of a traditional Hereford and about one third the size of a Friesian (Holstein) milking cow.

How does a cow digest food?

Domestic cows feed on grasses, stems, and other herbaceous plant material. An average cow can consume about 70kg of grass in an 8 hour day. Cows twist grasses around the tongue and cut them with their lower teeth. Domestic cows are ruminants. Ruminants have a special system of digestion which allows for the breakdown of the relatively indigestible plant material which they consume. Cows have a four chambered stomach including a rumen, reticulum, omasum, and abomasum. Grass passes through the rumen where it is mixed with specialized bacteria. From the rumen it moves to the reticulum, where it is broken down further. The partly digested food, known as cud, is regurgitated and chewed. It is then swallowed and moves into the omasum and abomasum, where digestive enzymes break it down further and nutrients are absorbed. The process of digestion takes 70-100 hours, one of the slowest passage rates of all animals. This method of digestion permits ruminants to obtain the most nutrients possible from these plant materials.

Cattle was first domesticated in the Middle East between 6000 and 5000 BC and then spread to Africa and Europe.  They are now found throughout all of the world besides Antarctica. Bos taurus is found in habitats where suitable food is available and there is native vegetation.

Milk is one of man’s oldest and most essential foods. Dairy products have been around since the days of Ancient Egypt, when only royalty, priests and the wealthy could afford it. Originally cattle served as meat, milk and labor, but by the 5th century A.D., cows were prized for their milk in Europe. By the 14th century, cow’s milk became more popular than sheep’s milk. The first cows came to New England in the 17th century by way of the Plymouth Colony. Farms started off small, producing only enough milk for a family and a little extra to trade in town. A typical farm would have one or two cows to milk, plow fields and for transportation. In 1611, the first dairy cows were brought to Jamestown, Virginia. Today’s dairy industry includes the farmers, who produce the milk; processors and manufacturers, who provide all the services needed to turn out a variety of wholesome, refreshing dairy foods; and the retailers, who bring these products directly to consumers (IDFA).

A cow’s tongue is the texture of sandpaper to pull grass and hay into the mouth.

– Cows use their tails to swat flies.

– Cows can smell odors up to five miles away.

– The average cow produces 30 pounds of urine and 65 pounds of feces a day.

– A cow’s heart weighs approximately 5 pounds and pumps 400 pints of blood through the udder to produce one pint of milk.