These monkeys usually eat seeds and fruits. At the zoo, they dine on commercial primate biscuits and vegetables.

What a distinguished white beard!

de Brazza’s monkeys are covered with brown fur with a whitish upper-lip and white chin fur. They also have a thin, white thigh stripe and a ginger-colored brow.

de Brazza’s monkeys typically live in troops of one male, one or more females and their young. Sometimes they will live in a smaller group of one male and one female. They will forage for food in the early morning and evening.

These mark their territory with saliva and scent, but they would rather avoid than challenge an intruder. If another monkey species approaches their territory, the whole troop may force the intruders from their territory. They use deep, booming calls to communicate.

de Brazza’s monkeys breed throughout the year. Usually a single infant is born, but twins can occur on rare occasions. Infants are covered with light brown hair. They cling to their mother’s stomach for security and protection from predators such as leopards, eagles, pythons and other primates.

Did you expect Tupperware?

When they are looking for food in open areas, de Brazza’s monkeys store food in their cheek pouches. Later, when they are in a safe area, they will eat the food. 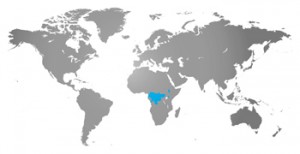