Dingoes live in many areas of Australia including the sandy desert, scrub, grassland, and forest edges. At the zoo, you can find the dingoes in the Australian Adventure Outback.

Dingoes eat the animals they capture like rabbits, sheep, wallabies, kangaroos, reptiles, and birds. At the zoo, we feed them dry dog food along with treats such as hard-boiled eggs, meatballs, and fish.

Dingoes arrived in Australia with humans from southeast Asia about 5,000 years ago. DNA tests show that dingoes are descended from wolves. Over time, dingoes have bred with domestic dogs, creating “dingo hybrids.” Only a few hundred genetically pure dingoes remain in Australia. The zoo’s dingoes are pure, not hybrids, making them genetically important to the future of the species.

Dingoes are generally solitary animals that keep to themselves when they hunt at night. However, they will form friendships and gather into packs only to hunt large prey. Dingoes howl like their wolf ancestors to locate friends and warn away strangers. Dingoes sleep in caves or hollow logs.

Dingoes breed only once a year in autumn or early winter. After the pups are born in late winter or spring, mothers will feed their young milk as well as chewed meat. Both parents look after the pups for at least a year until they can survive on their own.

Note: In some parts of Australia, dingoes are killed for bounty. Conservationists are working to change Australian laws – and perceptions – to protect dingoes. 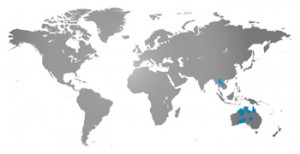