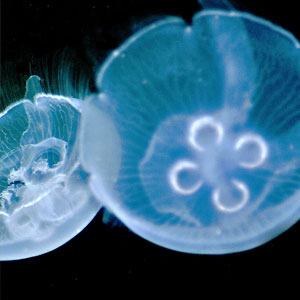 The moon jelly is found in oceans worldwide, but they are common along most coasts and inshore seas. They prefer the warm, tropical waters in bays, estuaries (where a large river meets the sea), and in the open ocean. Moon jellyfish are one of the most common types of jellyfish and often get washed up on beaches during high tide or after a storm.

No PB for this Jelly

These jellyfish eat plankton, mollusks, crustaceans, and aquatic eggs. At the zoo, we feed them brine shrimp, a commercially made jellyfish diet, and black worms.

A bell that doesn’t ring

The body, or bell, of a moon jellyfish is an average of three inches in height and six to eight inches across. The whitish, translucent saucer-shaped body can have a slightly blue or pink tone. The color of a moon jelly depends on its diet. They are pink or lavender if they eat crustaceans. They are an orange tint if they’ve been eating brine shrimp. Many short, finger-like stinging tentacles hang down from the body. Long feeding arms grab food and bring it back into the mouth, which is found in the center of the bottom of the bell.

Moon jellyfish float near the water surface, just off the shore or in large harbors. They swim by pumping their bell-shaped body. These jellyfish swim mainly to keep at the proper depth in the water, as they make little progress against strong currents.

This won’t hurt a bit

Although moon jellies do sting to feed, their sting is generally not harmful to humans.