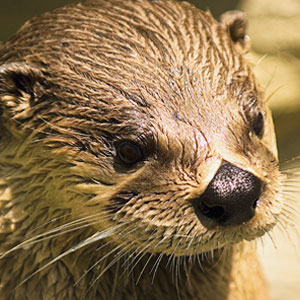 A home on the water

River otters live primarily near riverbanks and lakeshores in Canada and the United States.

Living along rivers and lakeshores, North American river otters eat small animals from these areas like fish, crayfish, frogs, snakes, lizards, and insects. At the zoo, they eat a canned carnivore diet, biscuits, and capelin.

Made for the water

River otters have physical characteristics that help them move efficiently in the water including webbed feet, water-repellent fur, and nostrils and ears that close in the water. Their muscular tails help them swim through fast river currents. River otters have red-brown or gray-brown to black velvety fur on the back, silvery or gray-brown underparts, and silver- tinged or yellow-gray cheeks and throat.

They just want to be left alone

North American river otters are solitary (live alone) except during mating time. During mating season, they squeak and whistle to communicate. Otters live in burrows, under a pile of rocks or a thicket near water, or in an abandoned beaver den. Females deliver litters of one to six young. The males do not help raise the young. When the young are about two months old, the mother pushes them into the water, forcing them to learn how to swim.

An otter for all seasons

In the winter, ottters remain active using ice holes to surface and breathe. They can hold their breath underwater for about eight minutes.

Back home again in Indiana

Otters once lived all over Indiana, but were completely gone by the 1940s due to overhunting. In the 1990s, officials brought otters from Louisiana to Indiana and released them in wild waterways. These otters survived and bred, so otters are making a comeback in the Hoosier State. 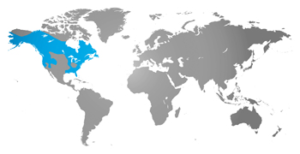