Where do they live?

Since they live in bamboo forests, it only makes sense that the red panda’s diet is mostly bamboo. They also eat seeds, fruit, berries, and an occasional insect, young bird, bird egg, or small rodents. At the zoo, they eat apple biscuits, apples and grapes. In Nepal, the word “panda” came from the word “ponya,” which means “bamboo eater.”

Red pandas are not closely related to black and white giant pandas. They actually resemble raccoons in size and appearance. Their red-orange, woolly coat has a dark brown underside, and their white muzzle has red-orange “tear-tracks” running down both cheeks. Red pandas have short, black legs and long, semi-retractable claws on their furry paws. A long, bushy tail ringed in red-orange and light brown aids the panda in balancing along tree limbs.

A day in the life

Red pandas are mostly nocturnal and live alone or in pairs, and they talk with whistles and squeaks. They live and feed on the ground, but often sleep in trees with their tail curled up over their head or tucked onto their chest. You may also catch them resting on tree limbs with legs dangling on either side.

Red pandas do many things like cats. Pandas will defend their territory by rearing up on hind legs and hissing. They also wash themselves with their tongue.

Female red pandas use natural shelters, like tree hollows, to raise one to four cubs. Cubs can take care of themselves after several months but stay with their mother for up to a year. 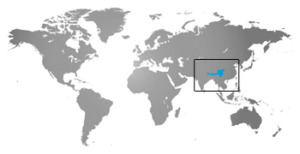