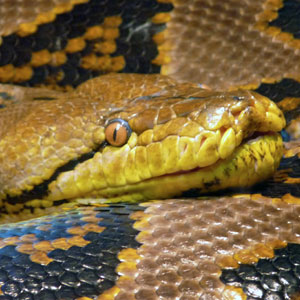 This species of python lives in tropical forests of coastal Southeast Asia, including the Philippines, Indonesia, Burma, and Vietnam.

Basically, reticulated pythons eat mammals. They’ll eat mammals as small a rat and as large as an antelope. At the zoo, pythons eat rats and young chickens.

The marks of a predator

Their large tan-brown bodies have dark, hourglass-shaped markings that camouflage the snake in its natural habitat. This camouflage allows the snake to hide and spring on unsuspecting prey that wanders across its path.

Though not endangered, large snakes have become limited due to a worldwide market for their skin, which is made into belts, handbags, and boots.

The reticulated python is the world’s longest snake. The longest one ever measured was 33 feet in length. Truly large pythons are now hard to find in the wild.

The female lays and 30 to 50 eggs in hollow trees and underground chambers. Reticulated pythons are one of the few snakes that actually incubate their eggs by coiling around them to regulate the eggs’ temperature. 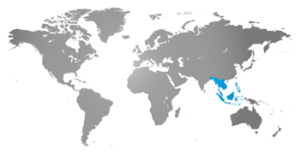