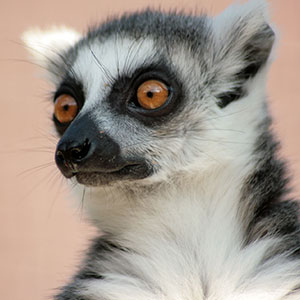 Off the coast of eastern Africa, the ring-tailed lemur lives on the large island of Madagascar. They live mainly in forested areas.

Lemurs’ bodies are covered with soft, thick, brown-grey fur that is very pale on their chest and stomach. The white face, with dark, triangular eye patches, has large, bright eyes, a pointed muzzle, and a black nose. Black and white rings run down a long, bushy tail. Preening takes up much time of a lemur’s time. Ring-tailed lemurs mark their territory by using stink glands to leave a strong smell on branches and rocks. When ring-tailed lemurs walk on all four feet, they often hold up their tail in the shape of a question mark. The word “lemur” is Latin for “ghost”

Ring-tailed lemurs are active both during the day and at night. Although they live mainly on the ground, they are very comfortable moving around in treetops. Lemurs escape to these treetops when threatened. They will defend their territory and signal alarm with loud calls.

Lemurs are always on the lookout for birds of prey, a natural survival instinct. Art the zoo, the whole troop will look skyward when a hawk or even an airplane passes overhead.

Ring-tailed lemurs live in social groups of five to twenty individuals. The group huddles together into a “lemur ball” to stay warm in cold weather. Males move from group to group, but females, who are dominant over males, and their young stay together.

Ring-tailed lemurs are born with lots of hair and with eyes wide open. At first, the baby clings to its mother’s chest, but later it will ride on her back. The young are independent after six months.

Less than 10% of Madagascar’s original forest cover remains, putting all 30 species of lemurs in jeopardy. 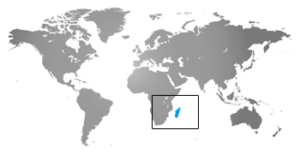