Living in the woods

The silvery-cheeked hornbill lives in the forests of East Africa from Ethiopia to South Africa.

This hornbill eats fruit, insects, and other bird’s eggs. At the zoo, they dine on grain pellets, fresh fruit, rice, and shredded carrots.

Put it on their bill

These birds are mostly black except for a wide white stripe on the lower back. They also have a silvery-grey colored head and a large, hollow, hornlike beak, both of which lend the birds their name. The beak’s edges are serrated so that the bird can tightly grasp its food.

Silvery-cheeked hornbills usually live in pairs and sometimes roost in flocks of hundreds of individuals.

Together the male and female make an enclosed nest by dabbing mud over the opening to a tree hollow. The female squeezes inside this hollow nest. Once the female is inside, the male patches up the opening to the nest, leaving only a small slit through which he will deliver food to the female while she incubates her eggs. Food is brought to the nest as a gullet full of fruits, which are regurgitated one at a time. Food scraps and droppings are passed out the vertical slit. At one observed silvery-cheeked hornbill nest, it was estimated the male delivered 24,000 fruits in the course of the 120-day breeding cycle. That figures about 200 fruits a day! Once her chicks are ready to fly, the female then breaks the mud wall and comes out of the nest with her chicks. While inside the nest, the female undergoes a complete feather molt. 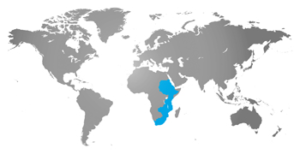