The tentacled snake can be found in ponds, rivers and streams in central and southern Thailand, southern Cambodia and Vietnam.

The tentacled snake eats various kinds of fish in the wild, and their venom is specific to the fish they eat. At the zoo, they eat goldfish.

These snakes have a pair of fleshy tentacles on their snout. A tentacled snake may be light brown with darker stripes or very dark with lighter brown blotches. The head is small but distinct from the neck. The eyes are small and round. The body is dark brown to tan or pale gray with pale or reddish brown stripes or bars. Adaptations to their aquatic environment include nostrils that can be closed so they can remain submerged for up to 30 minutes without coming up for air. If bothered, tentacled snakes become completely rigid and remain that way for several minutes, even when lifted out of the water. They are strong swimmers and will thrash vigorously to escape danger

What are those things for anyway?

This is the only species of snake to have twin “tentacles” on the front of its head. The purpose of these tentacles may be to detect prey or to lure unsuspecting fish that swim nearby, but they are most likely used as sensory organs.

Tentacled snakes are nocturnal, so they are active mostly at night. They hunt by lying in the weeds in water, waiting for prey to swim by. They remain in a rigid posture under water with the tail anchored around a plant, branch or tree root. Their color and pattern provide camouflage while lying in ambush. They lie motionless with the body curled into a distinctive “J” shape, and wait for fish to swim past. When a fish nears, the snake “ripples” muscles in its neck area. This movement causes the fish to reflexively flee. Unfortunately for the fish, it flees directly towards the snake’s mouth, where it is easily caught. Tentacled snakes are mildly venomous with small, partially grooved fangs positioned deep in the rear of the mouth. While their venom is powerful stun their prey, it is virtually harmless to humans. 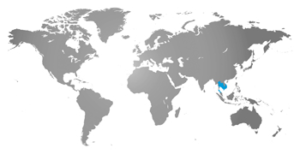