Living in the rain

So they have white faces…and?

Actually, only males have white faces, while females have dark faces. Their fur is thick, coarse, shaggy, and long which protects them from the weather in the rain forest. They do not have prehensile (grasping) tails. Their nose is flask-shaped with widely separated nostrils. Their lower front teeth are specialized for opening nuts and tough fruits in order to obtain the large nutritious seeds hidden within. This allows them to eat unripe fruit not palatable to most primates. Their legs are much longer than their arms, which helps them leap between branches, as far as 30 feet!

Saki monkeys are usually seen alone or in pairs. They often live in groups of up to twelve. They are diurnal (active during the day). Sakis stay in the canopy of the rain forest most of the time and rarely come to the ground, except to feed at the shrub layer. At night they sleep coiled on branches.

Females have one young at a time. They usually give birth in late November or December. Infants cling to the mother’s belly, then later they cling to the back. Born with brown fur, at two months old the males begin changing color to black with white faces, but the females stay brown. After six months, the young are independent.

If saki monkeys are threatened, they fluff up and shake their body hair. Then they stomp their feet with their backs arched. 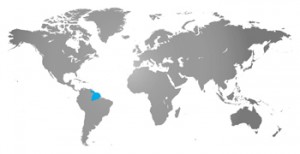