I had just left the Kangaroo exhibit. To my left, I saw a small blue plaque that read “Walk-Through Aviary.” I knew an aviary meant an enclosure for birds but I wasn’t sure if it was worth it. However, no one else was in there. Every other exhibit was crowded with eager children in chunky strollers, so I decided the brief moment of unaccompanied walking would be worth it. I opened the first heavy gate and impatiently waited for it to close before opening the second.

As I took my first step inside, I looked up to see three grayish-yellow birds with blushing red cheeks directly above me, staring right back. Cockatiels. The animals I had seen earlier that day hadn’t seemed to notice me. But the Cockatiels did. They sweetly sang to me as if to say “Welcome to our home!” 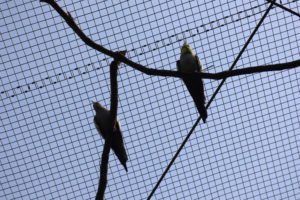 A second step inside. I looked down to the path in front of me. It wasn’t much: just a red dirt path that would only take about ten steps to cross. There were shoe prints and skinny tracks left from wagon wheels. The only thing that separated my feet from the birds’ grassy lawn was a small rope fence up to my knees.

Just next to the rope, beneath a shady bush, laid two sleepy ducks with their bills tucked under their wings. I inched forward and knelt to get a closer look. My nearness in no way disturbed their slumber. These weren’t like the ducks I saw in the central pond of the Zoo. These ducks had light brown feathers with dark spots scattered across each one. Freckled Ducks. 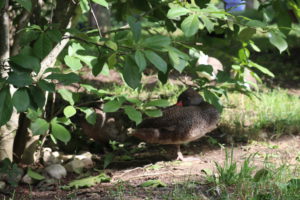 I stood up and took my third step. A bright yellow face was peeking around a tree to take a closer look at me. A Masked Lapwing. The bird hesitantly walked into the open to get a better view. His distinctive face made him look like he was ready for a masquerade ball. 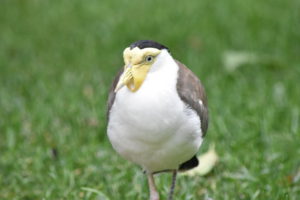 My masked friend retreated back to his corner, so I took one more step into the center of the aviary. I closed my eyes to focus on the sounds instead of the constantly moving sights. The cockatiels were still singing to me. Feathers fluttered and shifted. The leaves on the trees and bushes rustled. Suddenly, a loud swoosh sounded inches from my ear and a gust of air pushed my hair across my face.

I stumbled forward in confusion. A Straw-necked Ibis flew past my head and landed right in front of me! Her long legs waded through the water in a small pool as she carried a stick in her beak. Another Ibis looked down at her friend from a vine. 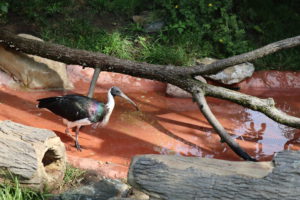 Behind, there was another bird. Not particularly fancy, nor colorful, but inviting all the same. I took a step deeper into the aviary to get a better view. A Crested Pigeon was rocking back and forth on a vine and cooing at me. 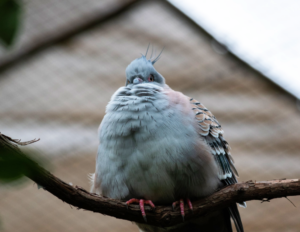 A splash of color flying behind the trees near the exit caught my eye. I walked forward to get a better view. The Rainbow Lorikeet. There was only one and despite his bright coloring, he was very difficult to find. Once he saw that I had noticed him, he flew to a closer branch as if to reward me for finding him in the tangle of foliage and vines. 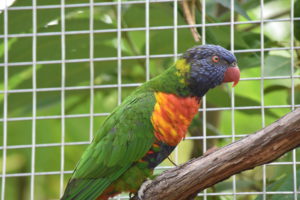 A burst of laughter broke my attention and I took a step forward to see out the exit gate. School groups and big families happily passed by and stopped to look at the Dingoes. This was one of the only places where I got to be right in the exhibit, personally interacting with the animals, and yet other guests were all walking by without noticing. I almost walked by.

Finally, another person entered the aviary to watch the birds. I felt better about leaving this hidden gem once someone else had discovered it. When the Lorikeet saw that a new person had arrived, he went back to the shadows to make them work as hard as I did to find him.

I took my last step in the aviary and opened the first exit gate. When I came in, I only opened one gate at a time out of obedience and obligation. When I left, I intentionally waited because I wanted to protect my new friends and their beautiful home.