From Ethyl to Edgar

You might have noticed that Edgar the Marabou Stork isn’t behind the giraffe anymore. No, Edgar didn’t fly away nor is he hiding from you! This winged friend took a few steps over to his new home on the Savanna. Since he’s moving in with new friends, we wanted to share a little about Edgar’s amazing life and all the other changes he’s seen.

In 1977, when Jimmy Carter was voted as President and the first personal computers were hitting the market, two Marabou Storks were born: Fred and Ethyl. After their second birthdays, they moved to the Fort Wayne Children’s Zoo. Fred and Ethyl moved from exhibit to exhibit together, always greeting guests with wing flaps and bill claps.

In 2005, while the Backstreet Boys were on the cusp of separation, so were Fred and Ethyl. Their Zoo Keepers noticed that Fred and Ethyl were disputing in a way that was “larger than life” and decided to re-examine their blood samples. Many bird species lack visual evidence of gender, so the only way to tell is through blood samples. However, the tests are not always accurate, which led the keepers to question their original diagnosis of sex.

After 26 years of thinking Ethyl was a female, they discovered that she was in fact a he! SURPRISE!

Since then, he’s been known as Edgar.

In 2006, when many of us were standing in line for the new Wii Gaming Console, Fred was in line to meet his new girlfriend at a different Zoo. Over the years, Edgar has lived with many different animals, such as: White Storks, Crowned Cranes and even the Zebras, Wildebeests, Ostriches and Vultures in the Savanna.

While living in the Savanna in 2010, Edgar gave his keepers a surprise more exciting than Kate Middleton and Prince Harry’s engagement: he went for a swim! Marabou Storks are known for wading in shallow water occasionally, but no one here had ever seen a Marabou Stork actually swim across a pond. One thing is clear, Edgar is full of surprises.

For 42 years, Edgar has patrolled the Zoo. He’s seen trends like parachute pants and mullets come and go, three Executive Directors and has watched the Zoo grow into the wonderful place it is today. As the longest resident here, Edgar has also seen many of you grow and bring your own little ones to the Zoo. The next time you’re near the Savanna in African Journey, be sure to greet our oldest pal. He might just clap his bill to say hello right back! 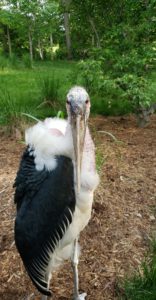 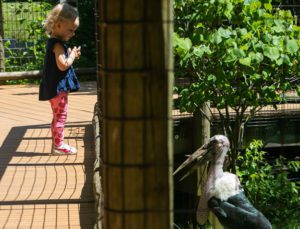