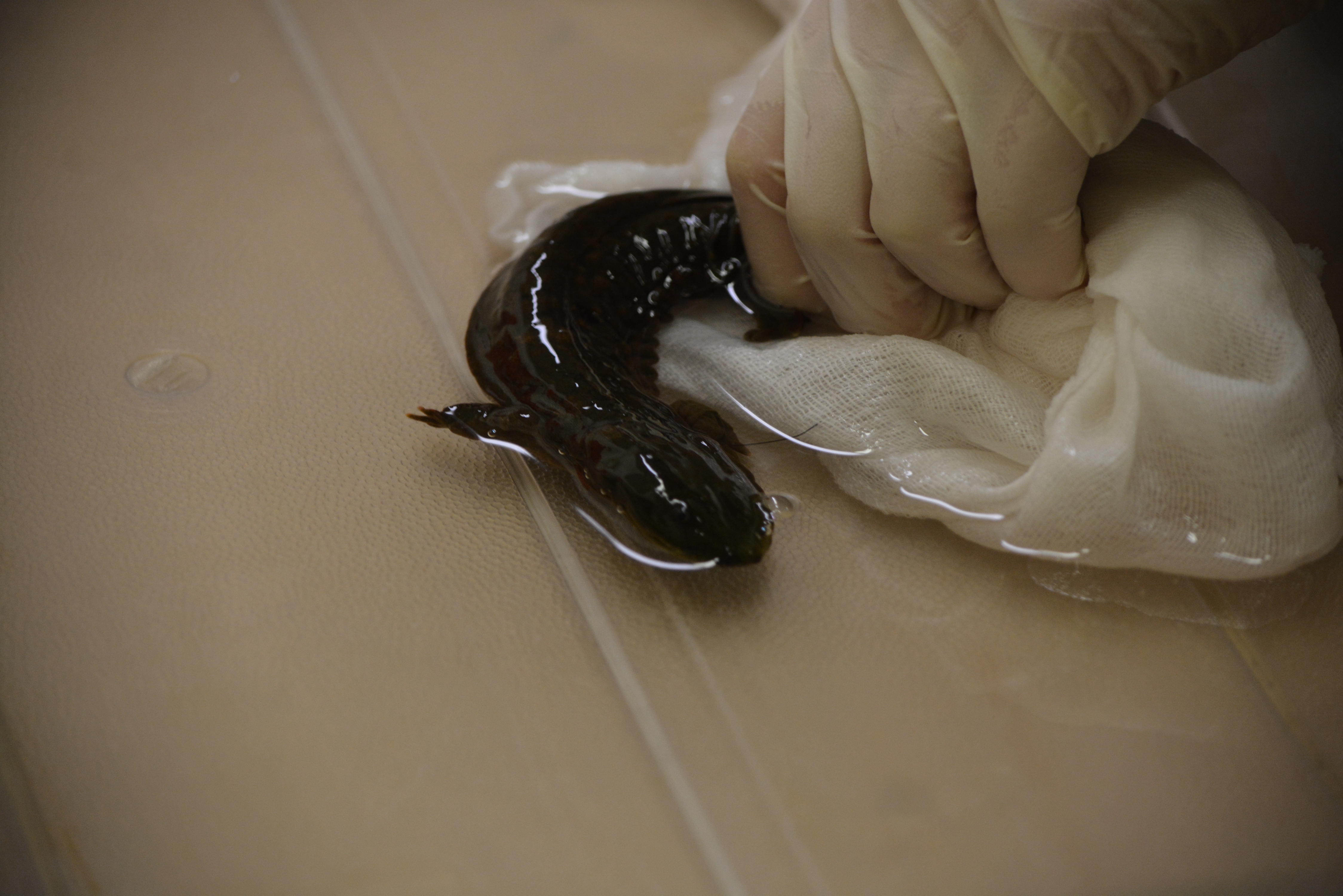 Most people have never heard of hellbenders- until I started working at the Zoo, I hadn’t either. This is probably because despite once being widespread across the Midwest, habitat loss and decreased water quality have driven the salamanders’ population down significantly. Less than a few hundred are left in the wild, and the Fort Wayne Children’s Zoo has partnered with Purdue University and Help the Hellbender to help save them.

While some people might not think that saving giant salamanders is an important cause, the hellbenders are an indicator species, which means they help indicate the state of their ecosystem. Hellbenders actually absorb oxygen directly out of the water through its skin and into its lungs. Because they are sensitive to pollution and sediment in the water, they are biological indicators of water quality.

For the past four years, our staff has helped to “head-start” approximately 60 hellbenders. Because they face so many challenges and have a low chance of survival if they are left to hatch in the river on their own, we raise them from a young age until they are big enough to return to the river. By doing this, we hope to reduce the chances of them being eaten by their many natural predators.

Once the hellbenders are big enough (usually around 4 years old), we take them to the river and release them! Although this may sound easy, there’s a catch: there is currently only a single river in Indiana that is suitable for hellbenders to survive. That means only one river in the entire state is clean enough for them to thrive in. And that river happens to be four hours away from the Fort Wayne Children’s Zoo. Despite this, on November 1st three Zoo employees bundled up and made the long drive south to help release hellbenders into the Blue River.

This day was years in the making, and was extra special as it marked the very first release ever done with eggs found in the Blue River. Even though it was 45 degrees and pouring down rain, everyone was so excited to be a part of such a monumental step toward saving the hellbenders that we didn’t mind (that much). It was a motley group of people that arrived at the muddy riverbank to help with the release; some zoo keepers, several Purdue students, our veterinarian Dr. Kami Fox, Dave Messmann, our resident hellbender expert, and myself, the Social Media Coordinator (it was clear immediately that I was out of my element as we trudged through the mud down to the river and proceeded to wade into the thigh-deep cold river and I attempted to not drop the camera into the fast-moving current). 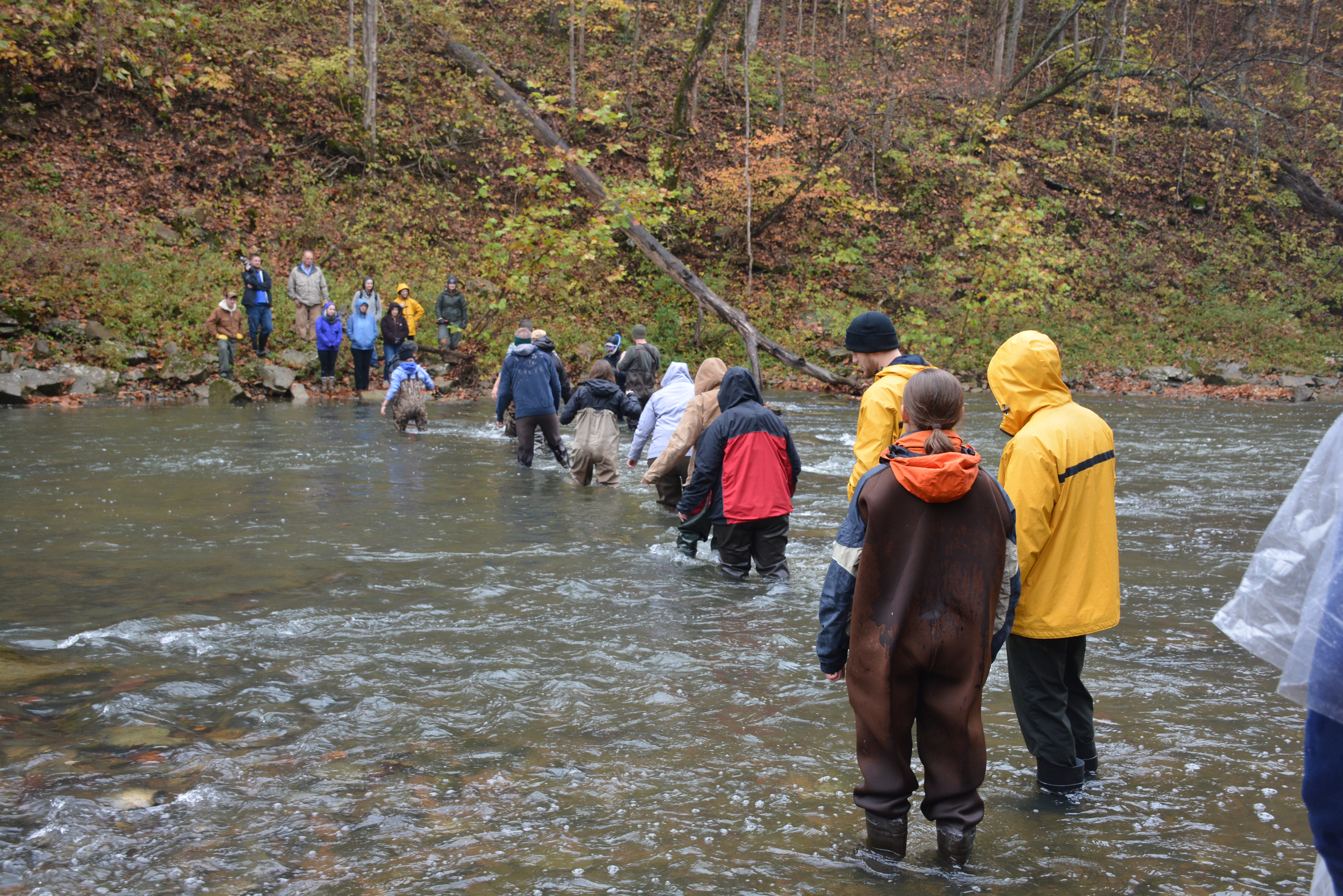 This was a “soft release,” which means that we placed the hellbenders into large underwater mesh cages to give them some time to acclimate to the flow of the river and the water before being fully released in a few days. Nick Burgmeier, one of the Purdue hellbender experts and our fearless leader for the day, had the pleasure of being fully submerged in the river to place the salamanders in their new home. Everyone managed to get water into their waders, except Dave Messmann, who decided to forgo waders and just wear his clothes into the river, and we were all freezing and completely covered in mud. But nobody was there for the glamour! We all did it for the common goal of helping the hellbenders. Dave, who has helped spearhead this entire project, said that his favorite things about being involved with the hellbenders include the releases, which will “hopefully help this species in the wild, learning their behavior and water quality in an aquarium setting, and working as a team to help keep the hellbenders healthy.”

By the end of the day, 40 hellbenders were released back into the river that they came from, which was a huge accomplishment! Everyone got to release one, and after seeing them up close even I had to admit these “devil dogs” are pretty cute. Each hellbender released was equipped with a radio transmitter, so that we can collect future data on the hellbenders’ whereabouts and survival success. Next year, the hellbenders we have been raising will likely be ready for release, and we will be able to repeat the process with the salamanders we have been working with for over three years.

There are a couple of subspecies of hellbenders (we have Easterns), but all of them are suffering. Even though the hellbenders aren’t something you can see on exhibit at our Zoo, it’s an important project. Employees like Dave have dedicated countless hours to ensure that our hellbenders are cared for properly so that one day we can rebuild a strong population in the wild.

Not everyone can go wade in a river and help release them like we did, but you can do something. Check out helpthehellbender.org to learn more about this amazing project and find out how you can help the hellbenders too! 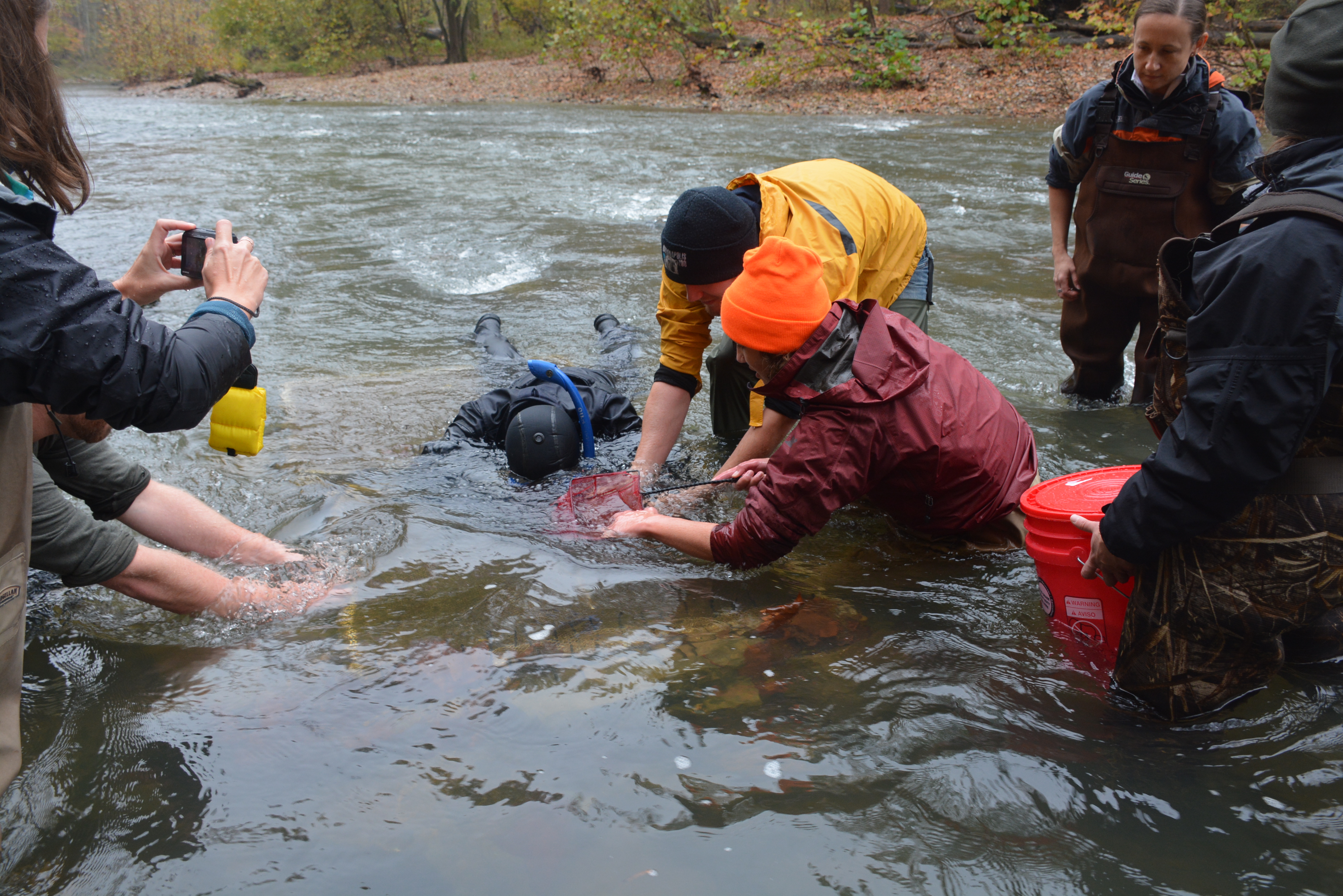