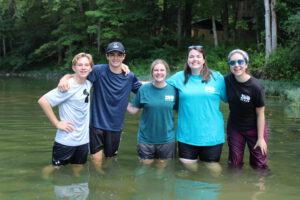 That day, with the biggest smile on my face, a small fish net in my hand, and a hellbender gliding into its new home, I became a part of a conservation mission bigger than myself.

On a humid August morning, myself, Zoo staff members, and two excited Teens For Nature volunteers, traveled down to southern Indiana to introduce 36 eastern hellbenders to their new wild home. After months of raising and caring for this endangered species, the hard work of community leaders around the state was finally coming full circle. Joining us on this initiative was Purdue University Fort Wayne, Columbian Park Zoo, Indianapolis Zoo, and Mesker Park Zoo.

Introducing this wrinkly species to their new home was a victory that makes Rocky running up those steps look easy. Eastern Hellbenders are considered critically endangered mainly due to human causes, including pollution, but these flat-headed amphibians play an incredibly important roles in the aquatic ecosystems that they call home. These slithering friends help maintain a lot of prey populations, such as crawfish or other small fish found in rivers, and act as an indicator species that can indicate the health of rivers and keep balance in the ecosystem. And after years of successfully raising these hellbenders, researching the perfect location for them to call home, and gathering the hands needed for a safe release, well, it makes running up 72 steps look like a breeze.

I wasn’t alone in my state of excitement. Even the teen volunteers described the hellbenders as, “ready to get to their new homes and explore what we can’t see.” And even though we were all knee deep in water with soaked shirts sticking to us, smiles were worn proudly, an unintentional part of the Hellbender Release uniform.

I’ll admit, I didn’t come to this release because I was born with a passion for eastern hellbender conservation. Before joining the Zoo, I had very little knowledge of this species. Don’t be shy, before reading this story you may not have known about them either. But that’s what we do best. The Zoo has a way of igniting a passion for every animal, from the small creatures that live in our backyard to the big ones living millions of miles away. Whether a species’ head is covered with a gorgeous mane, feathers that point straight up, or flat wrinkles, we’ll work together to give them a safe home and we’ll tell you all about it along the way.

So, call them what you will: snot otters, water puppies, or even lasagna lizards – to us, these 36 eastern hellbenders will forever hold a place in our hearts.