Home | Zoo News | It Takes a Village to Raise a Hornbill

There is a popular saying “it takes a village to raise a child” and the same could be said for Bushy-crested wild hornbill chicks.  Our story begins deep in Thailand’s Budo-Sungain Padi National Park with the hero and heroine of my story, a Bushy-crested hornbill breeding pair.  In late January 2018 our pair finally found their perfect tree nest, hero made his intentions clear, the pair nested and closed the nest entrance on February 5th.   I know busy, right?!  Now the hard work really began for our hero and his family.  This family aspect makes the Bushy-crested hornbills different than other hornbill species.  They are cooperative breeders, with each breeding pair assisted by the previous year’s chicks.  Lucky hero, this year that included 2 family helpers.  Hero and his two offspring helpers spent 127 days feeding heroine and chicks every 1 to 2 hours.  Two chicks were successfully fledged on June 12th.  Hero and Heroine were reunited, and their “village” celebrated their success.  Yay and the crowd goes wild……… but this isn’t the end of my story.  There is another village involved in this wild hornbill chick raising story and that’s the human villagers that live in the Budo forest.

Meet Mr. Hawa Kajay.  Just like you and me, Hawa’s primary concern is taking care of his family.  More than 20 years ago, to feed his family he would climb high up a tree in the Budo forest, break into a tree nest and steal young hornbill chicks to sell.  Yes, Hawa was a poacher.  In 1999, he learned through meetings in his village that there was another way.  If he would become a guardian for the same hornbill nests that he poached from, he could earn even more, taking better care of his family and keep his forest filled with hornbills.  In 2016, he trained his son Bukru as a new research assistant.  It is from Hawa’s 293 hours of observations that we know Hero and Heroine were successful in 2017 and 2018 in their nesting efforts.  But this still isn’t the end of my story.

The Hornbill Research Program started in 1978.  One of their projects is the Thailand Hornbill Family Adoption Program.  This is the program that subsidizes the local villagers if they become guardians for hornbills, collect research data, and create awareness in hornbill conservation among local people.  Researchers now have 40 years of nesting observations including success, food sources, nest issues and hornbill behaviors.  But wait there is still more.

The Fort Wayne Children’s Zoo in late 2017 added the Hornbill Research Program as a conservation partner.  That first year, we were able to adopt 7 Hornbill Family Nests including our Bushy-crested hornbill Hero and Heroine’s nest with their 2 successful chicks.

It took a very large village to raise two Bushy-crested hornbill chicks and the Zoo was part of this village, half a world away.   Want to be part of this village?  If you would like to adopt a hornbill family in Thailand, please visit http://hornbill.or.th/support-us/adoption/ and support our conservation partner, the Hornbill Research Foundation. 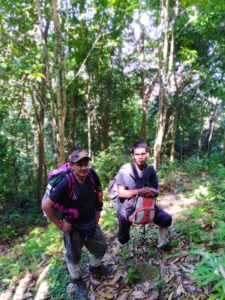