The Sumatran Orangutan Conservation Program (SOCP) has been working alongside the Fort Wayne Children’s Zoo since 2012 on environmental education, research and protecting the habitats of endangered orangutans. 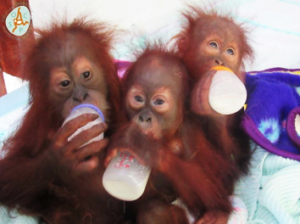 Meet some of the Orangutans

Uda (male) is the youngest at only eight months old, while Gaia (female) and Haga (male) are both about one year old. They were found late 2019 after police received a report about three orangutans found in a dumpster.

The three little ones were incredibly nervous when they were placed in SOCP’s care. Haga and Uda clung onto each other until members of the SOCP team were finally able to gain their trust. The SOCP staff used blankets and dolls to comfort the little ones. Gaia was the first one to become comfortable, and even on the first day there, she was exploring their “climbing toys,” which are branches that they tie together. Uda, being the youngest, has needed some extra attention and work in order to get him comfortable enough to trust the staff. 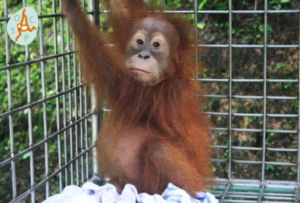 Photograph from SOCP- Gaia after her bath

Their case is still being investigated, but thanks to the SOCP staff members, Gaia, Uda, and Haga are finally getting the treatment they need.

Thanks to wide scale deforestation, many orangutans have been displaced due to habitat loss and end up closer to humans; therefore, some of these orangutans—particularly infants—are kept as pets or sold illegally.

Upon confiscating the orangutans, the SOCP thoroughly examines each orangutan and holds them in the hopes of being able to rehabilitate and release them back into the wild. To combat further population loss, SOCP works with local and international officials to protect and strengthen the current orangutan populations.

Thanks to the money generated from Zoo guests and memberships, the Fort Wayne Children’s Zoo has been a part of the conservation efforts to save critically endangered orangutans like Gaia, Uda and Haga.  To learn more about our conservation partner, Sumatran Orangutan Conservation Program, visit their website at https://www.sumatranorangutan.org/. There, you can donate to their cause or even sponsor an orangutan.