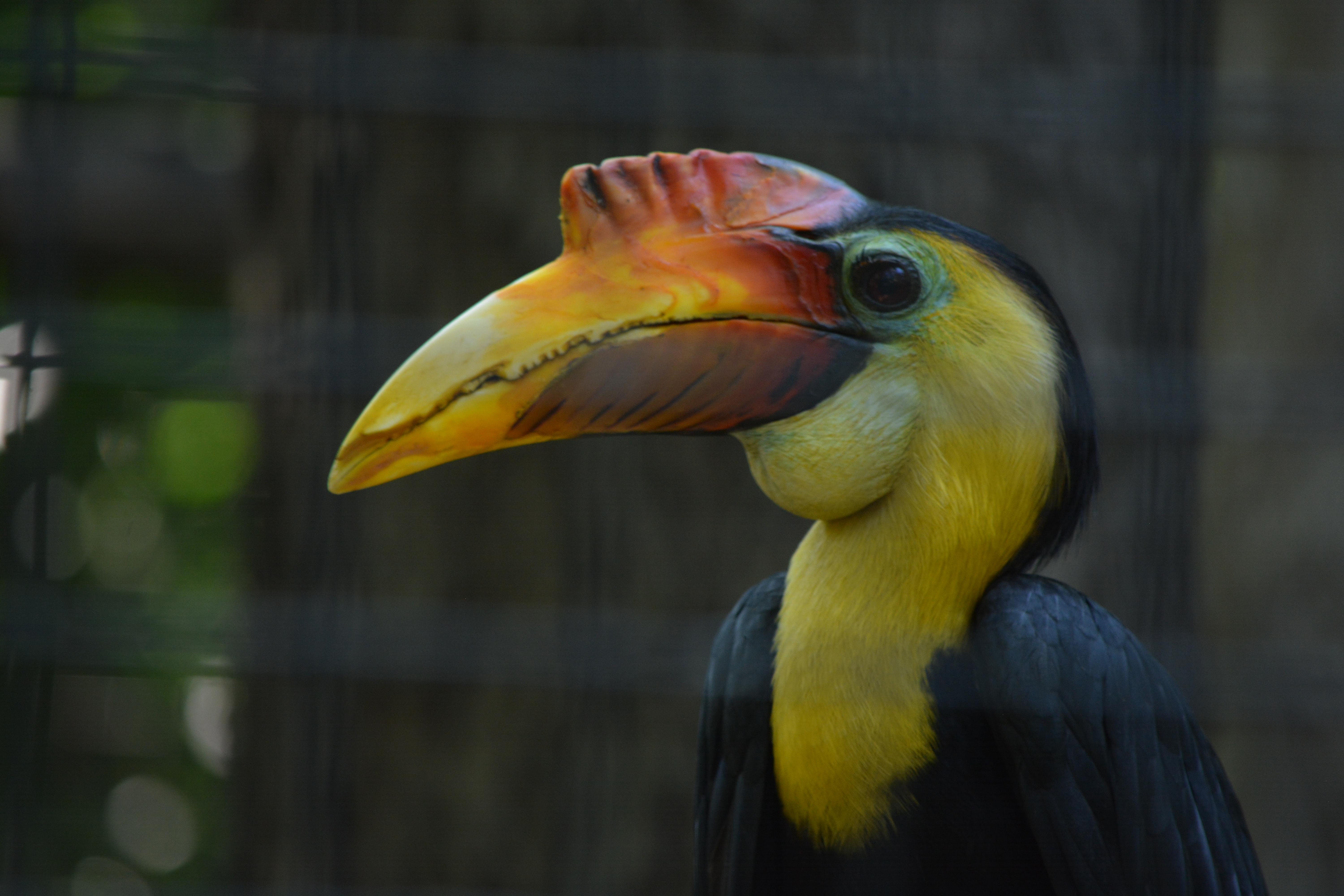 Here at The Fort Wayne Children’s Zoo we have a pair of Wrinkled Hornbills (Aceros corrugatus), Bayu (Bye-you) and Ayu (Aye-you). Bayu, which means “the wind” in Indonesian, is our 16 year old male and Ayu, meaning “beautiful,” is our 13 year old female. You can tell them apart based on their size and coloration; males are larger and have bright yellow and red heads and beaks while the females are smaller and darker in color.

If you visited our Zoo this summer, it might have looked like there was only one bird in the Wrinkled Hornbill exhibit. But fear not; our female, Ayu, had a very busy summer sealing herself into her nest box. During nesting season, the female will seal herself inside of the nest box using wood shavings, sticky food, and feces. We made sure that the pair was provided with all the things that they need to be successful, such as adding foods like figs and boiled sweet potatoes to their diets to help them seal up the opening. Ayu worked on and off sealing the nest box for a couple of days before sealing herself in fully. She does not leave the nest box until the nesting process is over, but she leaves a very small opening so that Bayu can feed her.

The last time that Ayu was seen outside of the nest box was July 16th. Once inside and sealed, females can lay between one to three eggs and will incubate them for about 28 days until they hatch. They then remain inside the nest box with the chicks until they are strong enough to emerge. This could take another 60 to 80 days! That means females stay inside their nest box for a total of around 90 days and throughout all this time the male is focused on feeding everyone in the nest box and protecting them from predators.

On August 24th, a keeper heard a small vocalization that could have been a chick. At that point, Ayu had been in the nest box for 39 days. It was confirmed in the following days that there was a chick that had hatched!  We helped determine that a chick had hatched based on what foods Bayu was picking to feed Ayu. Chicks are usually fed higher protein items when they are young and when Bayu immediately started feeding Ayu mealworms and crickets we were pretty confident that we had a hornbill chick.

Based on our timeline, we hoped that Ayu and the chick would break out of the nest box before the end of the season. Wrinkled Hornbills are native to Indonesia, and are very sensitive to the cold Indiana temperatures. As the temperatures started dropping, we began to worry about Bayu. Since he had to stay outside to feed Ayu, he was especially susceptible to the weather. After conferring with vet staff and keepers, it was finally decided to move the nest box (with the chick and mom still sealed tightly inside) indoors for the winter. It was quite the process, but our team was able to safely relocate the heavy box inside so that the hornbills could be warm for the winter and emerge from the nest box when they were ready.

The 90 day mark came and went and still the chick and its mother did not emerge. Finally, on the 123rd day of the female’s nesting process, our animal care team decided to break the seal and see if the birds would break out. Once that seal was broken, Ayu and the chick emerged within minutes! At this point, the chick was 84 days old. After the neonatal physical a few days later, it was determined that the chick was a female, and was given the name Nuri, which means “colorful bird.”

Though it was a long and tedious process to produce a single chick, it was well worth it. In fact, our chick Nuri was one of only two Wrinkled Hornbill chicks to successfully hatch this year in any zoo! This represents a huge achievement for their species, whose population is suffering in the wild. Because of our animal care team’s hard work, we are excited that we have made steps toward saving this endangered bird.