Meet Valentine! Named after a special heart-shaped mark on her forehead, Valentine has been greeting guests at the Fort Wayne Children’s Zoo for seven years. Though you may have seen this zebra shark swimming in The Reef, you may not have seen the eggs that Valentine keeps hidden out of sight.

There are three ways in which an animal can reproduce: oviparous, an animal that lays eggs, ovoviviparous, an egg develops and hatches inside the female, and viviparous, giving birth to live young. Zebra sharks are oviparous meaning they lay eggs; in fact, females can lay up to 40 eggs at a time! As if this wasn’t amazing enough, female zebra sharks can reproduce without the presence of a male, meaning their babies are technically clones of their mothers. In the last two years, Valentine has laid eggs not once, but twice.

You may be asking yourself, “How?” and so did we and a lot of other researchers! It was once believed that this was a rare occurrence in zoos that didn’t also have male zebra sharks present; however, we now know that this is quite common. Through collaborating with Georgia Aquarium, we’ve worked together to care for these eggs while also studying them. Valentine’s eggs, also known as “mermaid purses,” were studied with about 21 different measurements, looking at color, size, shape, viability, and comparing them to zebra shark eggs found in professional care. We recently received the great news that Valentine’s eggs were normal and their coloration was just right – a result that isn’t normally found in zebra sharks in aquariums!

While this research is being done on the eggs, we are still keeping a watchful eye on Valentine! Looking at her diet, behaviors, and other signs that will help us learn the amount of eggs Valentine can, will, and has laid. We are thrilled to be a part of the research for this species and learn even more about how we can create a better future for this endangered species. 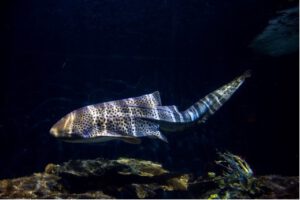