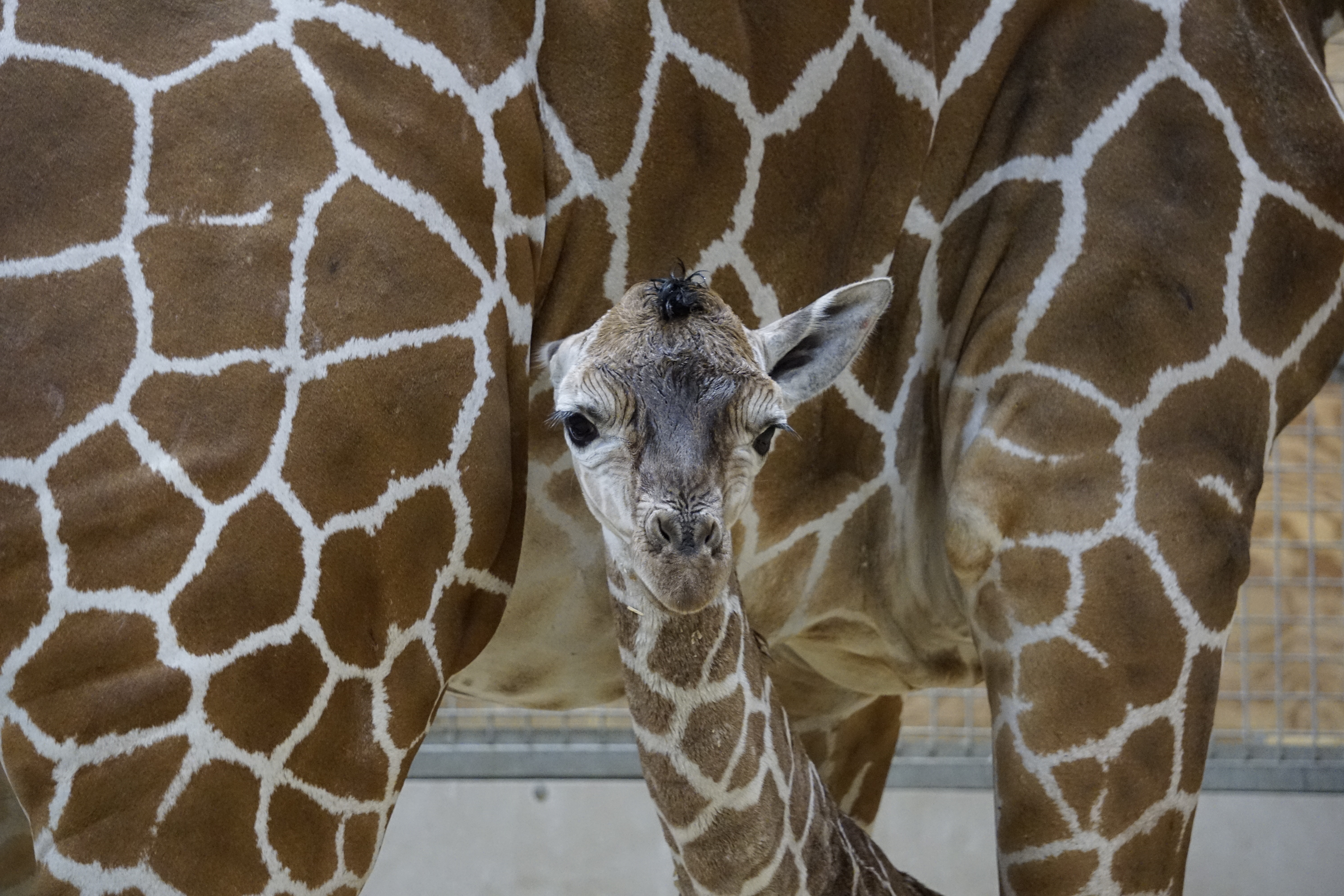 On the morning of Sunday, August 6th, our giraffe keepers walked into the barn to find a big surprise. Zahra, our expectant mother giraffe, was in labor!

When keepers arrived for their morning shift at 7 AM, Zahra had already gone into active labor, and after a few more hours of pushing, we welcomed a beautiful new female giraffe calf into our zoo family at 9:28 AM! Giraffes give birth standing up, so the baby had a long way to the ground. As the largest living land animal, it’s no surprise that giraffes give birth to large babies- and though our new calf is on the smaller side by giraffe standards, she still weighed 172 pounds and was over 6’1″ tall at birth- that’s one big newborn! She’s growing quickly too- at a week and a half old, keepers estimate her to be 6’3″ now, and is gaining weight right on pace.

Just thirty minutes after birth, the new calf learned to stand, and was aptly given the name Kita, which means “to stand firm” in Swahili. Calves must learn to stand quickly so that they can immediately begin nursing, which is what Kita did shortly after standing.

The next day, it was time for Kita’s neonatal exam. At first, she vocalized at the vet staff and ran away! They were finally able to hold her so that the vet could perform a thorough exam, take some blood samples, and make sure she was healthy. “I think she was a little mad at us for a day or two,” said giraffe keeper Aimee after the exam, “but she is now back to readily giving kisses!” None of the tests revealed any concerns, and Kita is a very healthy little girl.

As for the rest of our giraffes- they are simply fascinated with the newest addition to their family. The younger girls, Mystic, Luna, and Faye, rush over to check on Kita as soon as they come inside the barn after being out in their exhibit all day, and her dad and grandparents love interacting with her. She can touch and smell the other giraffes next to her, but does not share a space with them quite yet. As they all get used to each other, she will be introduced to the other giraffes in a shared space, starting with her Grandma Zuri. She already has formed a strong bond with Grandma, who likes to stick close by and watch over Zahra and the new baby.

Though Mom lets her little one have fun, she is also extremely protective of her. Kita is Zahra’s second calf with Ezeji, and keepers say that she seems more prepared this time around. Zahra is very wary of new visitors in the giraffe barn, and Kita takes her cues on what to do from Mom.

Now over a week old, Kita’s personality is beginning to shine through. She is very curious, and is beginning to show a feisty streak! Keepers say she has started to demonstrate a “sassy personality, and is very similar to how her mother was at that age.” Aimee also reports that though she still naps a lot, like most babies, she often “fights sleepiness because there is so much cool stuff going on in the giraffe barn! Right now, her favorite game is running circles around Mom.” As Kita grows and begins to interact more with the other giraffes, her personality will continue to develop, though her keepers say that she is already more feisty than her brother Kiango was!

Kita also loves her keepers already- she interacts with them regularly and likes to watch them work. They discovered that she enjoys their auto waterers, and loves to splash the water up in the air!

In addition to adding more fun and cuteness to our giraffe herd, this new baby also serves as an ambassador for the declining giraffe populations in the wild. Giraffes are considered to be a “vulnerable” species due to habitat loss and human population growth and illegal hunting. Once widespread across southern and eastern Africa, new population surveys estimate an overall 36 to 40 percent decline in the giraffe population. Our partnership with the Giraffe Conservation Foundation helps to support giraffe research and implement plans to save them. You can help by visiting our giraffe platform and by supporting the Giraffe Conservation Foundation.

Despite being the size of a full-grown human, Kita acts just like any other baby would, and spends her days napping, playing with mom, and exploring her new world. Although it will be a few weeks before Kita is able to be introduced to the public, we can’t wait for you all to meet her!